SEVENTH SENSE is a wonderful Ferretti Custom Line Navetta 33. She was delivered in 2008 and fully refitted in 2016. On her 3 spacious decks she offers abundance of living space, stabilisers at anchor and underway combined with everlasting exterior and interior design by Zuccon International. Experience crew of 6 will pamper her 12 guests (10+2) in 5 ensuite cabins. Master cabin with walk in wardrobe is located forward on the main deck and two VIP’s and two TWIN cabins with pullman beds are on the lower deck. SEVENTH SENSE is powered with two MAN engines with total power of 2720 BHP. On cruising speed of 16 knots her range is 1000 nautical miles. 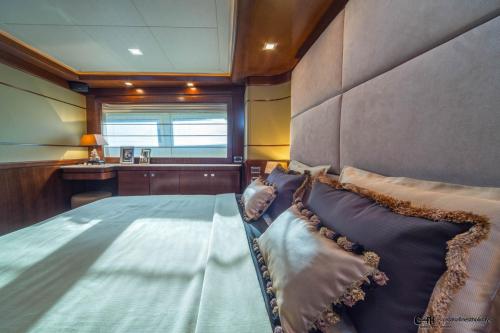 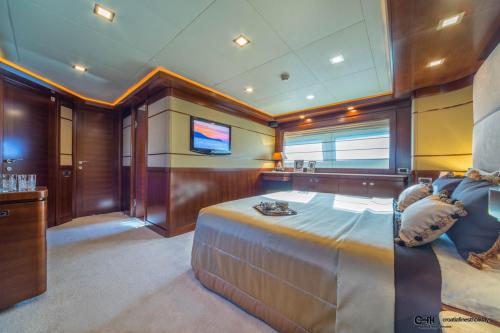 Captain
Andrija grew up in Šibenik where he finished his compulsory education and later obtained degree in nautical science at University of Maritime Studies in Split. He has been around sea and ships all of his life, spending his highschool summers onboard fishing ships and later getting hooked on sailing when got opportunity to learn it at university. At that time, he started to work as a professional skipper on sailing and power yachts at age of 21, and later switched to running few successful charter companies, but never losing connection with actual nautics, regularly spending one month at sea on various private or charter yachts. After that, he dedicated his professional knowledge in running motor yachts as a captain – both private and charter yachts. Andrija is a reliable and thrustworthy person, dedicated to his guests onboard, good leader of his team and person to whom you can always approach with any problem of requests. He speaks fluent English and Italian, and uses German and Czech language. Married, father of two sons.

Chef
Ivan spent his childhood in Split, his hometown. During his career, that lasts over fifteen years, Ivan has worked in various restaurants and hotels where he perfected himself into a masterchef of sweet and savory five-star dishes. He has also worked on luxury tourist boats along the Dalmatian coast where he gained strong expertise in preparing Dalmatian and Mediterranean cuisine. Ivan is a true professional, dynamic, responsible and independent and always ready for a challenge. He will satisfy diverse palates and without compromise always supply the freshest top-notch quality ingredients.

Engenier
Goran was born and raised in Split. He grew up with a love towards the sea and the ships. He was always out on the sea or beneath it. Goran’s desire to work at sea led him to the yachting industry where he worked on motor yachts as a skipper with a busy schedule in the Adriatic Sea. He worked as deckhand on a privately owned luxury yacht as well. Goran enjoys sailing, free diving and fishing. His work ethic exudes enthusiasm, responsibility and positivity. He speaks English.

Firts mate
Nikola was born and raised in Split, grew up loving ships and sea. In his rich experience, he was vaterpolo player, deck cadet at merchant navy ship and also a lifeguard on beach. Before joining Cassiopeia, he worked as a deckhand on smaller motor yachts and on small cruise ship on Adriatic sea. At work he is always smiling and very responsible and reliable. Nikola speaks English and he is friendly and communicative person.

Chief hostess
Antonia was born in Šibenik, finished high school for tourism and hotel business. She’s in hospitality business from her higschool days, working in summers at hotel receptions and restaurants. She’s in industry as of 2013, working as a yacht stewardess on smaller yachts, finally joining Cassiopeia this year. She is always smiling and positive, excellent with children and very communicative person.

Hostess
Zrinka was born in Slavonski Brod where she spent her childhood, later obtaining her Master’s degree at University of Economics. After working as regional sales manager and key account manager for two successful delivery companies, she switched to yachting in 2014, starting her career as a yacht stewardess on smaller yachts and finally joining Cassiopeia in September 2015. She is professional and reliable, making sure that clients will spend unforgettable moments onboad.